NAACP, why are you doing this?

On August 3, 2017, I received a surprising news notification to my phone: for the first time ever, NAACP issued a statewide travel advisory, warning people of colour to not travel through Missouri.

Before anyone wants to throw hate in the comments, let me finish. I love what the NAACP stands for and its achievements since its inception. I’m not American, but I resonate with their mission to advance justice for African Americans.

It contributed to securing the rights that my friends and family have across the pond. So, anything I write is sourced from a place of love, not hate.

Race relations in the US are not perfect. Discrimination is rife. In a way, I’m happy that the NAACP has posted a nice “shut the f&*! up” to Americans who believe that racism is a “thing of the past”.

But as the founder of a platform that promotes travel, the NAACP’s advice doesn’t sit well with me. I’m not happy.

Black people have endured enough in America, but unfortunately have to brush racism off everyday. Many of our followers on Instagram have mentioned that travelling internationally while black can’t be that dangerous for African Americans, since America is a pretty dangerous place in itself. 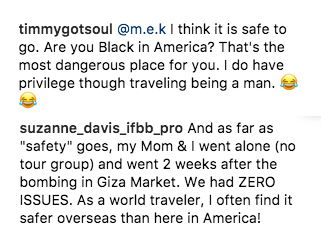 Just a snippet of the comments I see. Black Americans clearly see the US as a dangerous place – this isn’t new.

This view seems to be quite commonplace. Everyone knows being black in America isn’t the easiest walk in the park.

So a set of unique events can only be the reason for this warning, right?

No. Missouri has been marked a no go zone due to 1) police brutality incidents and 2) discrimination legislation.

Just in case this has fallen on deaf ears somewhere: police brutality happens everywhere. In the US, there have been a number of high-profile police brutality incidents nationwide – more than what we can mentally stand. Therefore, this advisory to me is both a slippery slope and an unnecessary method to scare us. Unless you put a warning advisory on every single state, it doesn’t make sense to pick Missouri.

To exemplify the pointlessness of the advisory, Rod Chapel, the President of Missouri’s NAACP stated: “You have violations of civil rights that are happening to people. They’re being pulled over because of their skin colour, they’re being beaten up or killed.”

What I’ve gathered from this is:

• Maybe more people are reporting police brutality. But this doesn’t change the alarming rate that it was initially at.

• The same issue that has been happening throughout the whole of the US… is happening in Missouri.

Point 2 is a little more disheartening, but definitely not enough to send out a warning signal. To be fair, you have to give props to Missouri for being so damn bold. Some judicial systems will hide their discriminatory ignorance all the way until sentencing or “pretend” that the discrimination presented is non-existent.

Dubbed as a ‘Jim Crow bill’, the Missouri Senate Bill 43 requires victims of discrimination to prove that the discrimination is a ‘motivating’ factor, not just a contributing one.

While this is one of the worst bills to become legislation in 2017, discrimination cases are hard to win anyway. They are simply just articulating in writing what we already know: people of colour, to them, will always be considered as second-class citizens.

As frustrating as both of these issues are, this warning has taken us backwards and will create a false sense of heightened fear. When I first read the breaking news – yes, this was deemed as breaking news – I felt scared and thought something incredibly new and disastrous had happened. To issue a warning over legislation makes people more scared than they should be.

Which brings me onto my last point: imagine how black people of Missouri feel after this warning? Some will now be scared of their own city, since authoritative figures are “informing” them that their town is risky.

With all of the resources you have, NAACP, you should not waste them implementing a change that detracts from black Americans’ wellbeing.

Acknowledge that America has its flaws, but don’t view Missouri as more of a dangerous state than you did a week ago.

So NAACP, here’s a tip: please continue with your progressive tactics. Ones that empower black Americans. Makes them feel better for being, well, themselves. Gives them more rights. Because we’re trying to avoid going back in time. And you’ve done just that.

What do you think about the travel advisory? 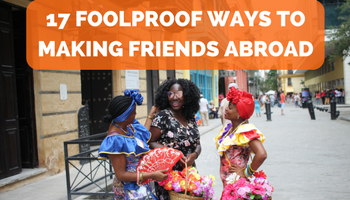